You are here: Home / Blogging / To Blog or Not to Blog in the Age of Medium 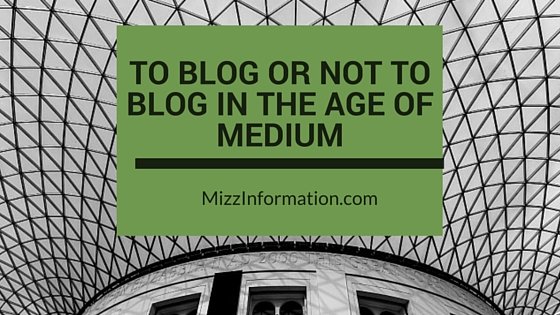 More and more, blogging feels like speaking into an unplugged mic. Which is why I and countless others who used to love it and do it religiously have either stopped altogether or seem to be winding down. Back in the day, blogging was about words. You wrote from the heart–or from wherever–clicked “publish” and that was about it. Maybe people read it. Maybe they didn’t. Regardless, it was about writing and maybe being read/heard and that was enough.

Then came Facebook and Twitter and Instagram and….just digital life as we know it today. Crowded and crazy and ADD-inducing, “content” is everywhere and takes up every minute of our days. A billion TV channels, websites, social media posts, YouTube videos, podcasts, images, apps…who knows where to look these days, either online or off. With too many things to read, watch, see or listen to, how can we not have gotten to the point where we need to be told what’s worth our time and interest? And who cares if the platforms telling us what matters to us are also the ones making billions off gathering and monetizing our data? Just as quickly as we celebrated blogs and the internet for giving individuals the power to voice their ideas without having to be filtered or curated by mainstream media, it seems we’re right back where we started: individual voices being lost as the new mainstream media tell us what’s worth reading. The powers that be are telling us not to bother with our little blogs or websites anymore because…money. I mean, because we are too dumb to know what is worth reading so we need sites that make billions to tell us what’s worth reading. So…because Evan Williams, CEO of Medium, tells us “The internet is not going to be about billions of people going to millions of websites. It will be about getting it from centralized websites,” we should believe him? When he says “…it’s going to make less and less sense to publish on the Web,” that makes it true?

Call me a conspiracy theorist or just Debbie Downer, but I personally agree with this guy that this is horseshit, and that this view is a big lie being propagated by network players who stand to make billions off us believing that the only way to be heard or matter is to publish on platforms that, in turn, make money from content either being written for free or sponsored content, the price of which only continues to rise as unpaid journalists supply a steady stream of eyeballs to sites like Medium and Facebook and LinkedIn. I side with Iranian blogger Hossein Derakhshan that we need to fight to keep the real internet alive and not buy into this new “linear, passive, programmed and inward-looking” internet that’s no better than crap TV.

Anyway, as much as part of me is sort of ready to throw in the towel with this blog, another wants to keep going just to spite the Evan Williams’ of the world who are trying to convince us that individual voices don’t matter anymore unless they’re talking on a platform that makes someone else money. The individual website won’t matter–and won’t exist–if we buy into the notion that we should keep contributing–for free–to websites that make billions off “content” created by everyday people who are only worth listening to/reading if what they say is upvoted by the masses, and that it isn’t worth publishing this same stuff on sites that we own and control, even if it means fewer views and/or shares and/or “likes.” F that. Don’t believe the hype. Or at least that’s what I keep telling myself…and why, I guess, I’m going to keep blogging.