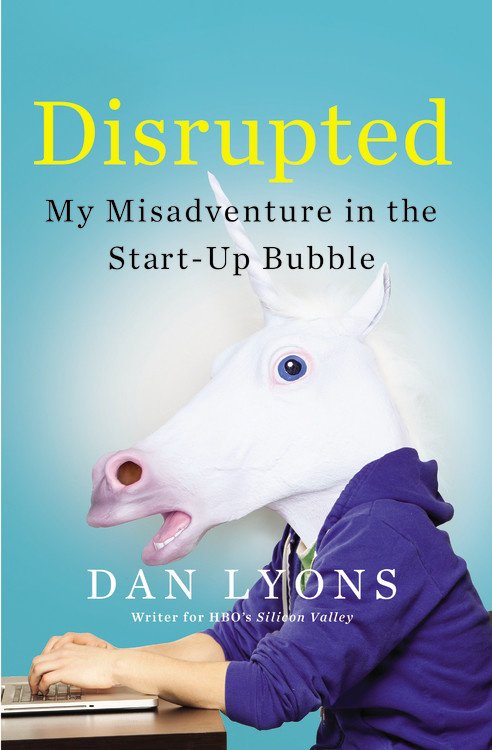 Ever since I started reading buzz about Dan Lyons’ book, Disrupted: My Misadventure in the Start-Up Bubble, I couldn’t wait to read it. I mean, what’s not to like? Scandal. FBI involvement. People somehow overlooking the drama and pretending nothing was weird at a huge event, even in the immediate wake of all the press about the whole thing. Add to that commentary about ageism in the workplace, veteran journalists having to reinvent themselves as marketers, insights about the start-up world–a world in which I’ve never worked–I mean, what wasn’t to like about this book?

So when it came out last week, I immediately bought the Kindle version and read it over the course of 48 hours. And it was everything I’d hoped for and more.

Let me back up and say that I’m an (almost) 48 year-old woman with an English degree and, even though I was never a journalist (well, unless you count “brand journalist” for a year…which I mostly don’t) and have certainly never worked at the same company for 10 years, let alone the 20 Lyons spent at Newsweek, I was curious to read his insights on switching from journalism to marketing because, in the association world, there’s a lot of that going on in one way or another. Also, as I’ve never worked for a start-up or a tech company, I always like reading about those workplaces that brag about “culture” and great-place-to-work-ness when you know it’s all just a ruse to attract young, cheap workers and trick them into working 24/7. Or at least that’s what I have always assumed–and, at least when it comes to HubSpot, apparently I was right.

The book seems to be getting its fair share of criticism in various reviews, but I personally loved it and think it’s a must read for pretty much anyone interested in workplace culture, ageism, the economy (call me paranoid, but I read it as basically the preview to the tech bubble equivalent of The Big Short), cult mentality, employer/employee loyalty and what both mean today versus 20 years ago (or even 10), trust and betrayal, and just the choices people make in their lives and how being an adult can sometimes be awesome and sometimes just suck.

Sorry…I know that’s a lot, but seriously–this book is about all that stuff and more, and I found it fascinating.

I’ll stop fan-girling here, but even if you’re not interested in the start-up world or tech companies, I think this is an important read from the perspective of ageism and the way the workplace has changed from being pretty much of an I’ll scratch your back if you scratch mine world where employers took care of employees and employees honored that commitment with loyalty, to a place where employers make no guarantees but still expect loyalty from employees, and look askance at resumes like, well, mine, seeing employees with short tenure as risky or just not good hires…even while they themselves don’t offer any sort of guarantees, career paths or other reward for long tenure. Companies want tech skills and cheap labor and jacks/jills-of-all trades who can do five different jobs at once for one salary…a lower salary than what specialized fields used to pay. For instance–journalism–Lyons never mentions actual salary figures but he infers that he made a pretty decent living as a journalist; now “content creators” are a dime a dozen and tech companies and associations alike expect to –and do–hire people who can write, code, produce videos and podcasts and do graphic design and manage social media channels and manage ad buying and do data analysis…all for the low, low price of…way less than, say, a Newsweek editor probably used to make.

In the book, Lyons talks about the concept of VORP–“value over replacement player”–or the value an employee adds to the company compared to a new person who could take over their position for a lower salary. Then there’s HEART–HubSpot for humble, effective, adaptable, remarkable and transparent–even though the company, as presented in the book, could not be further from any of those things, his descriptions of nary a non-white face in the whole company and the vast majority of employees looking like models from a J.Crew or Nantucket Vineyard catalogs, beer taps in all the kitchens and the Boiler Room-like call center that Lyons–a writer–was relegated to for not being a good do-bee….the book is pretty much one long SMH or WTF.

The most shocking and depressing thing about Disrupted was the overt ageism that Lyons endured, and the way nobody seemed to give a shit. So, whereas “old” people like me are supposed to know enough not to say things that diminish or devalue younger workers–and obviously discrimination is just a NO, period, in the workplace–at least at Hubspot, age discrimination was just fine. As was overt bullying by his supervisor–a guy who, at least as he’s portrayed in the book, is just batshit crazy, frequently leaning  over to whisper threats and gibes, Hannibal Lechter-like, to Lyons throughout his workday. And that was apparently NBD as far as HR was concerned.

I’ll digress now so you can just go read the book already, but seriously–read it, if for no other reason than so I’ll have someone to talk to about it.