You are here: Home / Uncategorized / What if the hiring process considered actual humans instead of a piece of paper? 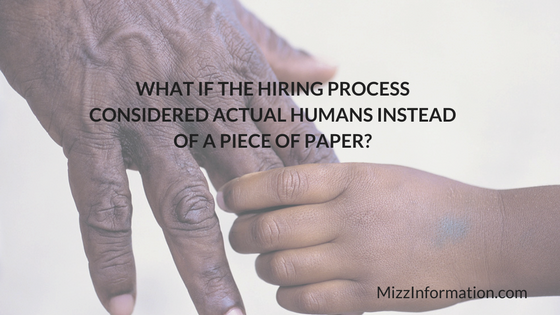 I’ve written before about my somewhat, um, nontraditional career path over the past decade. I wish I was the kind of person who just grew up knowing what they wanted to be, got a degree in that field, landed the perfect job right out of college, and that was that. What’s not to like about that scenario? It works for many people–hell, it’s worked for my dad, who’s been in the same place for more than 50 years. Yes, you read that right–50 YEARS. So how did this apple fall so far from that tree?

Beats me–other than that the work world is a different place now and I’m a different person and my life has had a few twists and turns that have affected my career. Like the fact that I stayed home raising kids for eight years then had to start over at square one at the age of 36…as so many women (and men) must do when they off-ramp to focus on parenting for a period of their lives. So no matter that there I was, having been a manager prior to taking a sabbatical to raise my kids, starting back as an admin assistant and having to work my way up the ladder all over again. I did it, just as plenty of others in the same shoes do. Then I continued to zig and zag, rising as far as I could in one place before realizing I’d have to make a jump to a new company to take the next painstaking step towards regaining the professional ground I’d earned almost a decade before, while at the same time maintaining a work/life balance that let me be available to my kids as much as possible because…you know, kids, they get sick and have summers off and winter breaks and just generally need parents.

So I did my best, balancing re-climbing the career ladder, family, self care and just life…as we all do. Except some do it a lot better than I did. That’s not to say I wasn’t successful–I was, by many standards. I continued to rise up the org chart and the payscale, volunteering and presenting frequently at association events–even being named to fancy lists like Association TRENDS Tech 10. I worked hard, focused on constantly learning and evolving, and monkey-bar’d (I just invented that term so I deem it grammatically correct) from one job to the next for various reasons.

Which brings me to today, once again laying myself at the mercy of hiring practices that just seem totally out of touch with the reality of work and life in 2016 and beyond. It’s no mystery that the workplace and the relationship between employees and employers today is much different than it was decades ago. Once upon a time, a company invested in you and you invested in the company and it was a win-win for both sides. Employees were loyal to their employers and companies rewarded good workers with stability, raises, and pensions for when retirement rolled around. We all know those days are gone. Pensions–as if. Employer loyalty to employees? Sure, when times are good and everything is going great…but employees are expendable, “at-will” resources that can be discarded at any time for any reason. Fair enough. But employees–they’re still expected to behave as if the work world of years past is still in effect. They can be dumped at will, but they’re expected to stay forever and be super grateful just to have a job.

Here’s the thing…and yes, I’ll get to my long-winded point soon–I promise! Even as the world has evolved and technology has changed everything about life, especially business, hiring and employment practices remain rooted in the 1950s. Companies say they want–and they do actually need–people who have new skill sets and who are able to remain nimble, constantly learning and adapting to ever-changing technologies. They need smart, savvy employees with a good work ethic who are willing and able to do more with less, to embrace instability and excel in spite of it. They need fresh minds and innovative thinkers. But the hiring process seems expressly built to keep them from ever hiring those people…or just human people at all.

I write this from the point of view of someone who is a hard worker, a fast learner and a loyal employee…who is also human and brings her whole self into a job, for better or for worse. What that means is that I’ve had a lot of jobs over the past decade…it just is what it is. I was and am trying to find the right fit and the right job while balancing stuff like parenting, fluctuating family finances that meant making hard choices, living with a medical condition that many consider a liability or just too uncomfortable or risky to talk about–depression and anxiety–and just life. I’ve never been fired; I’ve always worked hard and been a good employee; I’ve had a lot of successes in my career and achieved a lot in the various roles I’ve held over the past decade. Yet, as I search for my next job, I face the reality that all that matters in today’s hiring mentality is people looking at the jobs I’ve held and the tenure at each, and mostly deeming me unfit to even consider because I’m a “risk.” I’m a risk because I am professional and presentable and work hard and can do many things well and get along with people and have a skill set that is extremely desirable in today’s job market? No, I’m a risk because I’m a human person who, for one reason or another, chose to not just sit my butt in one chair at one company for a decade and instead did the human thing of trying various things with varying results.

Anyway, I’ll stop whining now…but seriously, if you’re still reading, how is the work world supposed to evolve and change to accommodate not only the changing world of business as we used to know it but also the next generation of workers who fully expect something different than their Gen-X or Boomer parents/grandparents did when they sacrificed health and family to slog to/from a soul crushing job for decades because that’s just what you did then, and the reward was a pension and a gold watch? There are no more pensions or gold watches–or even the promise of a job come tomorrow or next year. So why is the hiring process still so archaic that it considers applicants as if they’re about to enter into a lifetime commitment with the new hire?  What if the hiring process didn’t suck and instead reflected the reality of today’s workplace: we need this skill/person now, you have this skill and are available–let’s try it and see how it goes then we’ll go from there. Like dating. But instead of dating, the hiring process is like an arranged marriage where hiring managers look at resumes like they are looking to sign a lifetime commitment with the person and something like job hopping is an immediate disqualifier. Why is it that someone with long stretches of employment is automatically a better candidate than someone who has had shorter stints with several companies–but still has great references and desirable skills?

I know these are all rhetorical questions, but still…I hate that it has to be like this and that I have to feel like a pariah for being human, and that instead of considering me, a multifaceted person who brings a lot to the table, hiring managers reduce me to a piece of paper and see no further than my employment dates and discard me without so much as a second glance.

If you happen to be hiring, or know someone who is, and are looking for a real person with real strengths and who is more than a piece of paper, by all means, please let me know. Here is my resume [PDF] and here’s my LinkedIn profile, so you can see the paper version of me—but I’m so much more than that, as many would be willing to attest to.