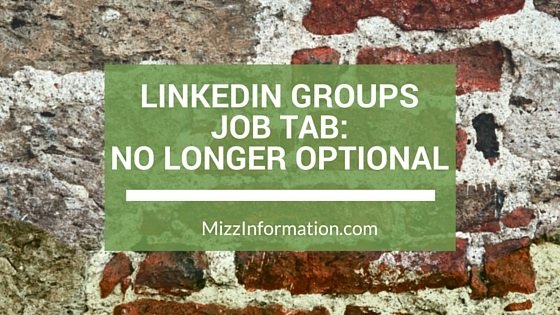 It’s been a few weeks since I posted about the then-upcoming changes to LinkedIn Groups that are likely to have a profound impact on associations who use LinkedIn as the platform for their member community. Since then, some of the changes have been rolled out: the promotions tab is gone from one of the groups I admin, along with all the posts that had been there; subgroups are no longer linked to groups; and activity overall seems to be way down–something that other group admins have also noticed.

A few of the other changes announced by LinkedIn–the ability to post images and use @ mentions in conversations– don’t seem to have been implemented yet, at least not in the groups I admin. And the feature that is perhaps of biggest concern to associations, the mandatory jobs tab, has yet to be implemented. The ability to remove the jobs tab, however, has been turned off. But if your group had the jobs tab enabled, you’ll notice that now the functions within it when you click “Jobs”: “Search for a Job” and “Post a Job” (to LinkedIn’s job product) are there but if you click “Job Discussions” you just get a blank screen.

For associations that have their own job boards that are a revenue-generating product, LinkedIn’s job feature within groups has always been contentious and many don’t allow job posts in LinkedIn groups (or other online communities) at all.  Every association I’ve worked for or with that had a LinkedIn group had a line in their group rules: “job posts are not permitted,” and LinkedIn group admins at least had the ability to disable the jobs tab. Having just launched my org’s job board, I know the announced mandatory jobs tab in Groups is a concern for me, so I asked a LinkedIn rep within the LinkedIn Group Moderator Community, to clarify whether all groups will, in fact, have the jobs tab imposed on them even if had previously been hidden. His answer? “For the Jobs tab: yes, all groups will have a Jobs tab. You can use it however you like, but we have decided to standardize this as a feature of Groups. That keeps the options simpler and makes the experience more consistent for members.”

I then asked if group owners will be able to post their own jobs for free, since that ability had been disabled a few years ago and group owners had to pay to post their own jobs in their own groups. His answer? “We try not to use the phrase “post jobs” because it can mean two different things: LinkedIn has a “Jobs” product, and posting a job there means the visibility will reach far beyond LinkedIn Groups (however, it isn’t free). Sharing a job opportunity in a Group is always free, you can just share a link to the job posting (on LinkedIn, or on other platforms like Monster).”

Um, the thing is, though, that they do use that exact phrase in the jobs tab: Post a Job. And for groups that currently have the jobs tab, you can indeed post a job via LinkedIn’s job product–which promises, in bold letters on the first screen, “10 applicants guaranteed!” I tried to post one to see what the cost was but, true to LinkedIn’s wonky form, “there was an unexpected problem that prevented us from completing your request.”

So the writing’s on the wall: associations will no longer be able to block job discussions within their LinkedIn groups or disable the jobs tab. How will this impact your association’s LinkedIn group–not to mention your bottom line?