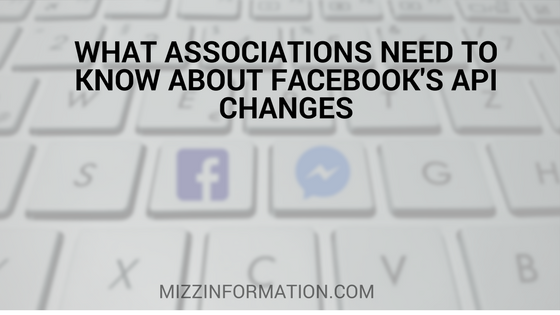 Ah, Facebook–that social network I love to hate, even though my career kind of depends on using it. For those of us in the association and nonprofit sectors, Facebook just got a lot harder to use effectively with the announcement that they’ve changed their API and eliminated the ability to modify link previews when posting links from a page. Until yesterday, when you shared a link on Facebook via a page, you had the ability to customize the title, link description and image for that link. With this change, links will automatically populate from your site’s meta data and you will not be able to edit the title of the page/article, the description or the image. As John Haydon points out, if your website lacks compelling images or has boring titles–or if your meta data is just wrong or non-existent, which is the case for many associations–you will definitely get less referral traffic from Facebook. And, undoubtedly, your organic reach will plummet since images are a big part of organic reach.

Especially for those of us in the association sector who have limited resources when it comes to social media and digital in general, Facebook is the platform that we tend to use/depend on the most even while it continues to make our lives and jobs harder. For brands and publishers who have ad reps and connections at Facebook–not to mention resources that most associations and nonprofits don’t have, like digital teams and the ability to move quickly when it comes to stuff like, say, changing metadata across your entire CMS within a few weeks’ time–things like changes to organic reach of posts and the just announced upcoming changes to Facebook’s API aren’t that big of a deal. Not only do brands and publishers have more resources than associations–not to mention they’re able to move much more quickly than most associations–but Facebook wants to make things work for them because doing so benefits Facebook.

But associations and nonprofits? Despite Facebook’s continued assertions that they care about the world and doing good, like helping build community and making the world a better place, the reality is that what they really care about is the bottom line. Which is fine–it’s a business, after all. But it’s hard to feel charitable towards one of the richest companies in the world when they continually pay lip-service to caring yet lag behind other tech companies when it comes to helping nonprofits–this article sums it up perfectly:

Facebook is a billion-dollar corporation, and should be looking to innovative nonprofits programs offered by similar tech giants. Consider Microsoft’s recent donation of software valued at $1 billion to nonprofits and universities, or Google for Nonprofits, which grants 501(c)(3) organizations free access to valuable tools like the Google Grants Program and YouTube for Nonprofits.

So associations and nonprofits have continued to use the platform despite tanking organic reach and effectiveness, and now Facebook has announced yet another change that will dramatically lessen association’s ability to drive results via Facebook. In usual Facebook style, they framed this change as part of their “continuing efforts to stop the spread of misinformation and false news” when, in reality, it’s just another way to favor companies that have money to spend on Facebook ads and Facebook partner services. For instance, they are offering a workaround to media companies/publishers to avert this change and claim “link ownership”…yet this option is only available to media publishers. Even though associations are media publishers, they are not considered by Facebook as such and this workaround isn’t available to associations.

Anyway, I’ll digress, but here are some other articles about this change:

Association social media managers–what do you think about this change?